We are proud to announce that our Foundation Chairman Ann Carpenter is the recipient of the first John Livermore Award by the Mining History Association.

The award is “given to individuals, contractors, suppliers, and companies that have gone beyond what was required to preserve, reclaim, conserve, and/or document mining heritage and the natural environment surrounding mining operations”. John Livermore was a philanthropist and donated $100,000 to help start our Park. Pictured are Ann and some of our Foundation members. 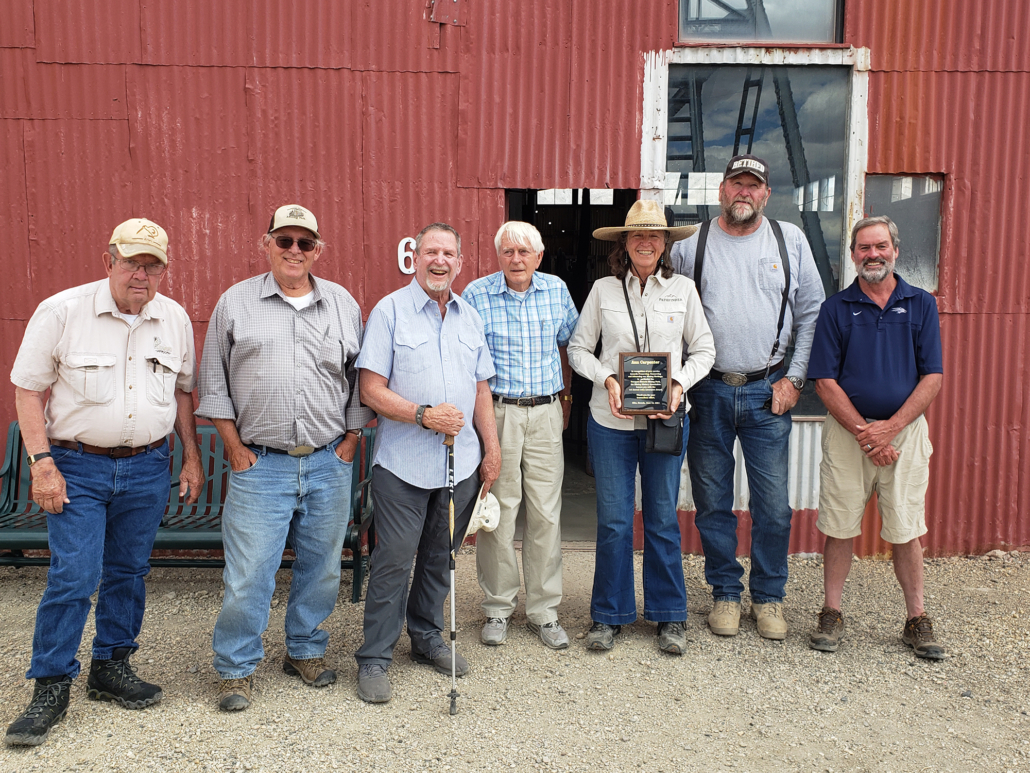 Restoration of the Silver Top began in August of 2019 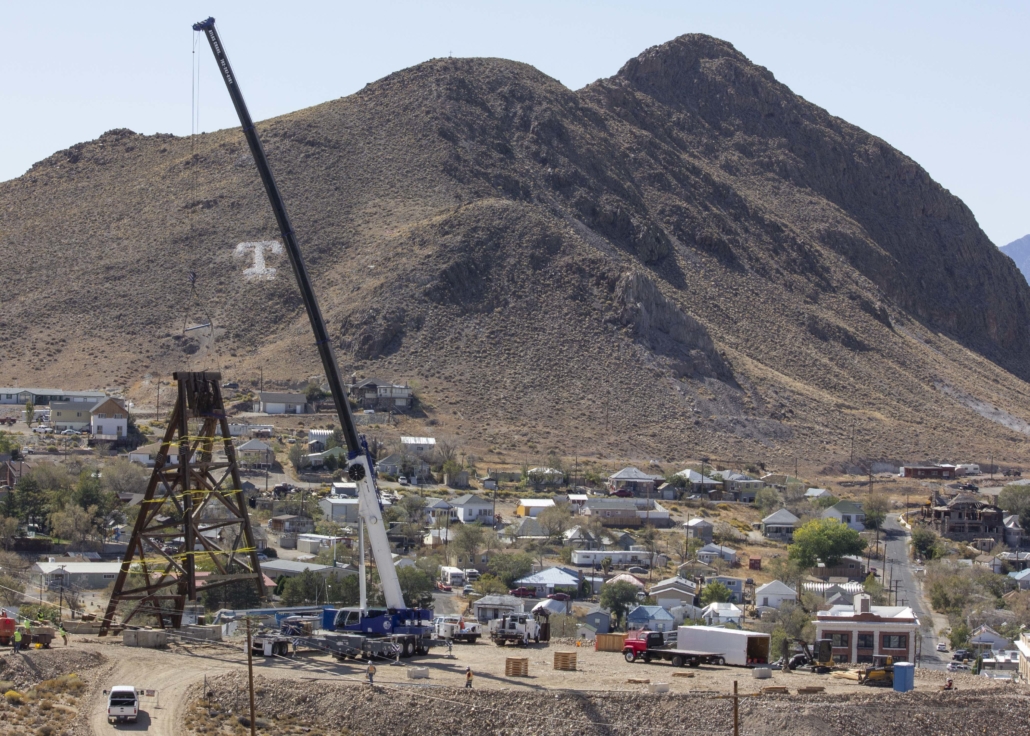 The head frame was stabilized and some of its pieces were removed. In September of 2019, the Silver Top head frame was cut off its original foundation and moved off to the side. 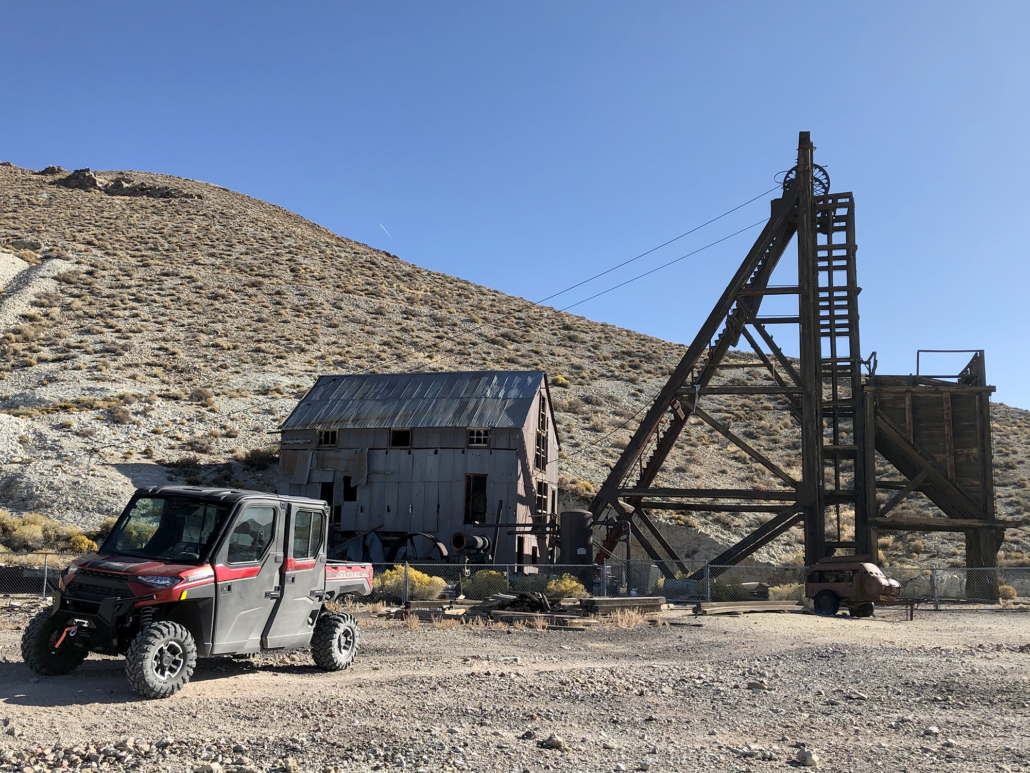 Complete with air conditioning and heat. 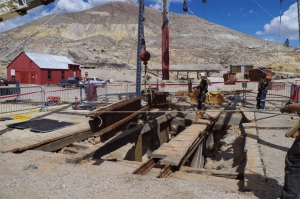 In late April of 2015, the Guy F. Atkinson Construction Team, supplemented with Tonopah resident “Stretch” Baker (filling the roles of crane operator and miscellaneous equipment supplier), and Ed Tomany (acting as a representative of the Tonopah Historic Mining Park Foundation Board of Trustees) opened the Mizpah Shaft to inspect and make needed repairs.

The three-compartment Mizpah Shaft – with two compartments for ore haulage and hoisting of equipment, and the third being a manway compartment – was opened for the first time in years.

Most of the damage was limited to the manway compartment where water had trickled down behind the three-inch timber lagging. The lagging was rotted and damage had occurred to the vertical posts, end plates, and wall plates (the horizontal members of the shaft timber sets). Four timber sets were replaced including the collar set and three below. 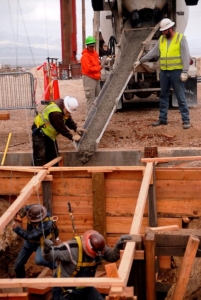 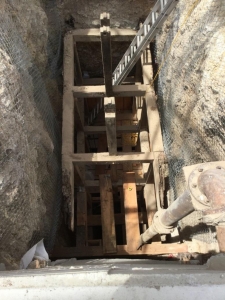 The shaft collar (opening) and the upper part of the shaft were inspected to ensure worker safety before work began. All timber was taken out of the shaft down to the fourth set within the first week of repairs. Each set is about five-foot vertical in the shaft and is comprised of vertical posts, end plates, wall plates, dividers and the three-inch-thick timber lagging behind the posts. The rock behind the lagging was air slaked ground which contains a large amount of grey clay that swells when it is wet, then freezes, thaws, and contracts when it dries. This cycle caused the rotten timber sets in the manway to load up, bulge, show weight and fail. Common maintenance practice is to relieve this weight load in shafts or timbered drifts before there is a failure of the timber; this is still a risky practice, even in present-day mining operations. When the old lagging was removed in the Mizpah, material flowed out like an hour glass.

The crew went down to the top of the fourth set, formed up the ends and braced it to support the weight of the initial concrete pour. 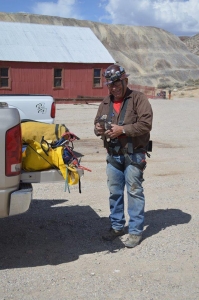 The first pour on the ends amounted to three feet of concrete. Then, with the initial concrete pour holding, the remaining two-and-a-half sets on the ends were poured and topped off with concrete. Once dry, the forms were pulled, and on each side the crew draped chain-link fencing as a safety measure due to the ground conditions. The crew finally relieved the fourth set and started reinforcing and installing new lagging from the fourth set up. They worked diligently to complete each set and then backfill behind the lagging with concrete. New 8” x 8” x 18’ timbers were installed horizontally to provide support for the one-inch steel rods used to support the hanging sets.

More than a hundred years ago the miners had skillfully blocked and wedged each set carefully into the country rock.

An inspection was made below the fourth set, and the lagging and timber were determined to be solid, with no sign of decay or rotting; there were also no apparent hanging rods present below the fourth set. Instead, more than a hundred years ago the miners had skillfully blocked and wedged each set carefully into the country rock. A minor amount of cleanup was completed on the fourth and fifth sets where existing ladders are sturdy and in place, and
landings are in good shape with access down to around sixty-eight feet below the Mizpah Collar. With the manway now secure, mine rescue and search & rescue training will again be available at the Mizpah. 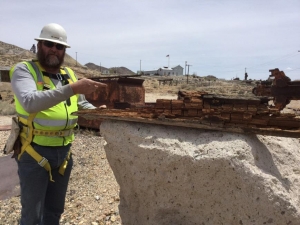 Additional funding was provided by a grant from the Nevada Division of Minerals. There were contributions from 50 folks in five states and Switzerland. Tonopah Historic Mining Park Foundation members who contributed to the head frame restoration effort through fund-raising included Ann Carpenter, Chairperson, Steve Tibbals, Bill Wahl and Don Southwick, who raised funds through the “Buy a Brick” project. 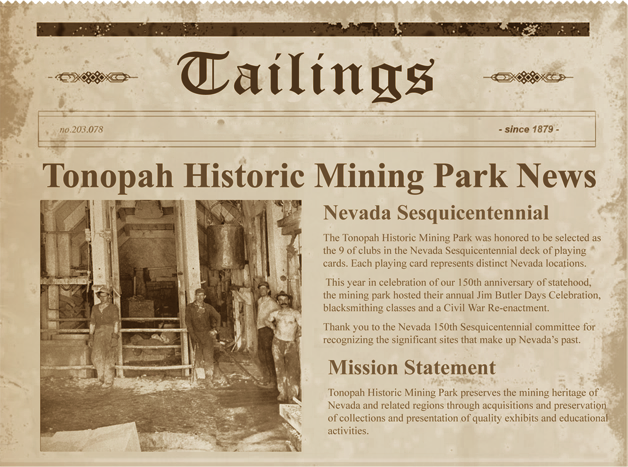